No matter what your health and wellness needs are, we offer a customized peptide protocol designed for you. Looking to lose weight, become leaner, increase muscle, increase energy, boost your immunity, have more radiant skin, speed up recovery for injury or increase libido? With the help of Balanced Bodies Anti-Aging Clinic, this is possible through Peptide therapy.

Peptides can be used to treat numerous conditions including enhancing growth hormone production, obesity, loss of lean muscle associated with aging, tissue repair including tendons, ligaments, and muscles, decreased collagen and reducing the appearance of wrinkles, decreased libido, erectile dysfunction, and dementia. As we age, production of essential amino acids and peptides decreases. As a result, our bodies begin to show signs of aging and cease to perform at an optimal level. There are currently numerous peptides in clinical use, with countless others actively in research trials. At present, over 7,000 naturally occurring peptides have been identified. For many years, peptides have been called Hollywood’s secret to the fountain of youth. Benefits start within the first few weeks, and they increase with continued therapy. Full effects are noticed after 3-6 months of therapy.

Peptides are short chains of proteins. These chains form amino acids and act as a signal to target specific receptors throughout the body. Each peptide therapy has a different mechanism of action and chemical structure. Peptides may act like neurotransmitters, while others may act like hormones. Peptides play a major role in how your body responds to diet and exercise. If issues of fatigue, endurance, poor recovery, injury, and healing are concerns, peptide therapy may be beneficial.

Peptides can be administered either orally via capsules, dissolvable tablets or injections. Peptides are taken between 5-7 days per week depending on the condition being treated. Peptide therapy is most effective when all hormones are balanced and in conjunction with good lifestyle habits including a healthy diet and regular exercise.

Aod 9604 is a modified form of growth hormone. This peptide was created using the last 15 amino acids of the growth hormone sequence. Research identified these 15 amino acids to be responsible for the fat burning properties associated of growth hormones. Benefits include increased metabolism with reduced body fat especially in the abdominal region. AOD 9604 stimulates lipolysis and triggers fat release from obese fat cells. In addition, there is no adverse effects on blood sugar, insulin,or cortisol.

BPC 157, has been shown in research to including accelerate tendon-to-bone healing and superior healing of damaged ligaments. In addition, BPC 157 seems to protect organs and to prevent ulcers of the stomach. This peptide is also shown to decrease pain in damaged areas. Those who suffer from discomfort due to muscle sprains, tears and damage may benefit from treatment with this peptide. It can also be helpful in improving the healing after burns by increasing blood flow to damaged tissues.

Bremelanotide improves sexual arousal and spontaneous erections and therefore effective in treating sexual dysfunction in both men (erectile dysfunction or impotence) and women (sexual arousal disorder). Unlike Viagra and other related medications, it does not act upon the vascular system but directly increases sexual desire via the nervous system.

These are two very potent Growth Hormone Releasing Hormones (GHRH), that stimulate the cells of the pituitary to secrete and produce more Human Growth Hormone. These two peptides, when used together, have shown to increase growth hormone levels 5 times more than when administered alone. It is a far more natural way to induce HGH production, with far less concern for side effects compared to Synthetic GH usage.This peptide combination is capable of increasing lean muscle mass, improving sleep quality and promote recovery, enhance skin health, appearance, increase libido, burning visceral and abdominal fat. We advise a at least 6 months of treatment for this protocol. It is given daily, 5 days out of the week with 2 days off. CJC 1295 has 10 times the fat burning effects than other peptides.

Promotes more youthful appearance of skin with less visibility and depth of wrinkles. Skin will have improved firmness and elasticity. Results of research studies show a 35% decrease in fine lines and wrinkles and a 70% increase in collagen within 3 months of continual use. These findings confirmed the anti-aging,firming and anti-wrinkle activity of copper peptide GHK-Cu.

Ibutamoren promotes the secretion of growth hormone and IGF-1. This peptide increases GH levels with little or no increase in other hormones including cortisol. Ibutamoren is frequently used to increase lean muscle, decrease body fat, and for repair and recovery. This peptide is taken orally once daily.

Melanotan 2 (Natural Tan without the Sun)

Melanotan 2 is a peptide used to stimulate melanocyte production and induce skin tanning. It also offers protection from UV rays. Users of this peptide report a positive effect on libido. There is a mild positive fat-mobilization effect and appetite suppressor effect as well.

Thymosin alpha 1 is produced naturally by the thymus gland. The thymus is where immune cells known as T cells mature and are released. This peptide has been proven to be effective for acute and chronic infections, exhibits antibacterial,antiviral, and antifungal properties, and protection against oxidative stress. Thymosin Alpha-1 has been used to treat medical conditions including Rheumatoid arthritis,Lupus,Lyme disease,Chronic fatigue,Hepatitis,HIV,and immune dysfunction.

Thymosin is a hormone secreted from the thymus, also important for a healthy immune system. Thymosin-beta4 has a role in tissue repair and has been found to play an important role in protection, regeneration, and remodeling of injured or damaged tissues. 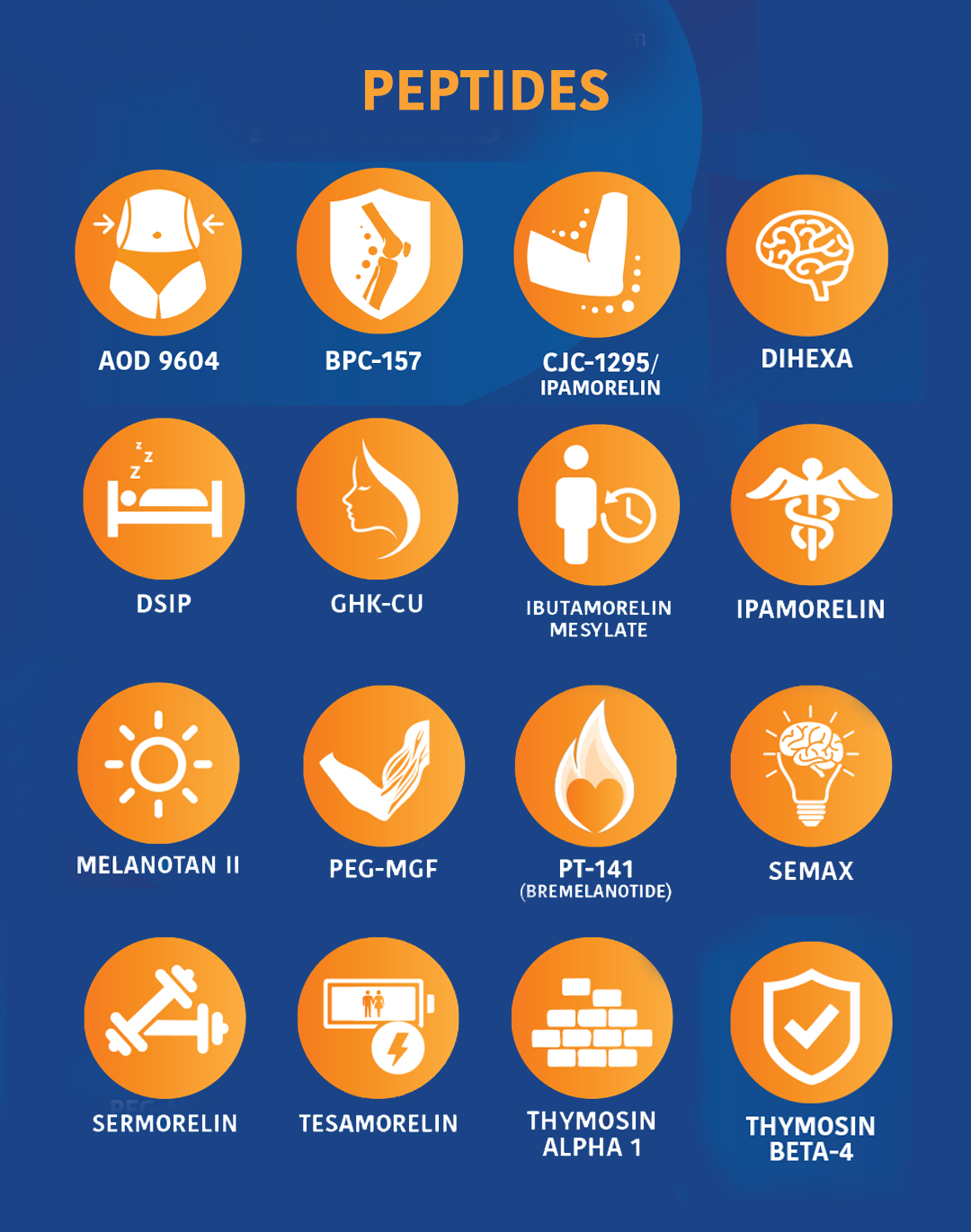